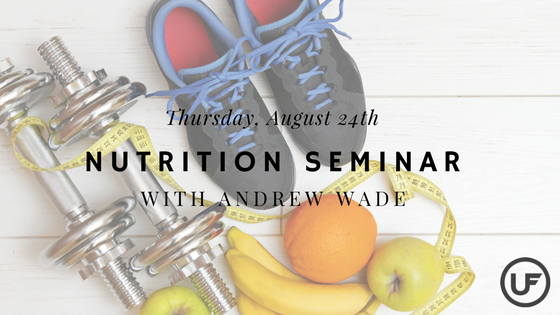 Keep reading for some background!

Andrew first dreamed of starting his own nutrition and wellness company at 15 years old. At this time, he was a passionate year-round high school cross-country and track athlete from York, PA. Being an athlete was a catalyst for his weight loss as a freshman and equally responsible for his sparked interest in nutrition. By his junior year, he knew he wanted to study nutrition and was known by his friends as a “nutrition expert.”

He chose The University of Pittsburgh to further his education for many reasons, in part because of their highly regarded Nutrition Program. His freshman year he took pre- med courses and at the end of his sophomore year he was one of twenty five students accepted into the Clinical Dietetics and Nutrition Program, taking his first step to becoming a Registered Dietitian.

The coursework within the program included very specialized nutrition courses such as Medical Nutrition Therapy, Nutrition Assessment, and Micro and Macro-nutrient Metabolism that continued to fuel his interest in the world of nutrition. Throughout his studies, however, he was keenly aware of his specialized interest in Human Performance.

During his sophomore year of college, he became interested in supplements while working for GNC as well as weight lifting which was around the time that an injury took him off the track and restricted him to the gym for 8 months. He continued working at GNC part time for 4 years and was kept up to date with the latest products, but was often concerned with the claims made by the supplement industry that were based on little to no clinical evidence. This motivated him to become an expert in as many supplements as possible to better help clients navigate the very confusing supplement world.

When senior year arrived, it was time for Dietetics students to select a post-graduate option. For those wishing to become a Registered Dietitian, there are two main options: a Coordinated Masters or a Dietetic Internship. Both require 1200 hours of supervised practice and 600 hours of coursework to sit for the RD exam. Keeping in mind his interest in Human Performance and his desire to specialize, he chose the Dietetic Internship. From August 2012 through May of 2013, Andrew worked within Adagio Health as a Dietetic Intern. It was a non-traditional Dietetic Internship that provided him with a very condensed educational format as well as exposure to business management. He completed his Dietetic Internship and knew the next steps were to take the RD exam and get a Master’s Degree.

He passed his RD exam in the summer 2013 and became licensed to practice in the state of Pennsylvania. He started Case Specific Nutrition part time in August of 2013 while working in the Food Industry. In January of 2014, he began working full time as a Case Specific employee, and began devoting all of his time to his dream.

In December of 2015, he completed his Master’s of Health and Rehabilitation Science with a concentration in Wellness and Human Performance at The University of Pittsburgh. This Master’s Program combined nutrition and exercise physiology which helped him serve as a better resource for athletes, those interested in weight loss, as well as the role of diet and exercise in chronic disease management. The additional coursework in his program contributed to his focus in eating behavior, particularly in those struggling with eating disorders and disordered eating.

In addition to creating and running CSN, he is part owner of the Pittsburgh Fitness Council, sits as the Diversity chair on the Pennsylvania Academy of Nutrition and Dietetics Board, writes for the Post-Gazette’s community voices nutrition blog, speaks frequently throughout the Pittsburgh area, and remains active in multiple professional groups.

We’re so excited to have you at this event to learn more!