Is Body Image Affecting You? 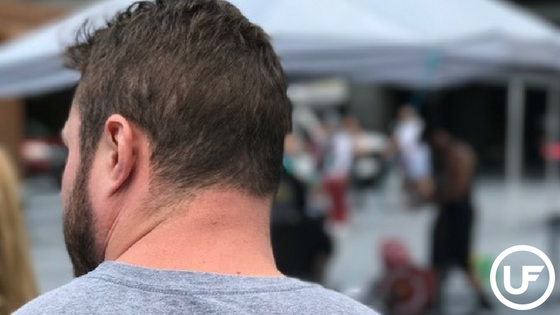 In this week’s blog, we wanted to shift our focus to the men of UF. Guys, I want each of you to take a minute or a less and describe yourself. What is the first thing that pops into your head?

How much of your description was based on looks? As a male, I believe that we think about our appearance a lot more than we let on. In social groups, men often get to be known as the Small Guy, the Large Guy, the Muscular Guy or even Small Calf Guy (I’m on this team). All jokes aside, I don’t believe men are as safe from body insecurities as our society tends think they are. With the rise of social media, fitness stars, and super heroes that have bodies like Greek gods, the expectations of what men “need” to look like are difficult to meet. For this reason, body dysmorphic disorder (or BDD) has become increasingly prevalent among the male population.

What is BDD? The Mayo Clinic defines body dysmorphic disorder as “being extremely preoccupied with a perceived flaw in appearance that to others can’t be seen or appears minor.” There are two parts to this definition that I will be focusing on: (1) the idea of a “perceived flaw” and (2) that “to others can’t be seen or appears minor.” I can guarantee that all of us can find a flaw in the way we view our bodies. But later in this article I will challenge everyone (but primarily men) to focus on your positive features. More than half the time these flaws are so minor that our friends can’t even see them, or even if they do, they barely realize they are there until you point it out. Take my example: I believe that I can fit a truck between the gap in my two front teeth but whenever I mention anything about my gap to my friends, the first thing they say is “I totally forgot you had one.”

Growing up as the younger, smaller brother – about 20 to 25 pounds lighter than all my brother’s friends – was a struggle. My appetite was more closely related to a person on a diet vs how most kids were eating as though it was their last meal. I wasn’t focusing on the calories, I was just the kid that didn’t have a huge appetite. This style of eating did not help when we chose to wrestle as kids. Eventually I got fed up with being “the small kid.” I started to lift weights and count calories, but more for the sake of gaining weight than losing it. I was finally getting bigger but still wanting to be known as the local tough kid, which lead me to join an MMA gym. Joining was a great idea at first, but as you could imagine, there I was at age 15 weighing 140 pounds surrounded by guys that had 30+ pounds and 5+ years on me, again being the reminded that I am known as “the small kid.” So I trained hard and started force feeding as much food as I could. I stopped going out to eat with friends or to parties because I felt like I had to make sure that I was getting enough calories. Now, I achieved what I wanted to accomplish after two years and was weighing about 175-180 hanging with the older guys. But even though I could hang with them when it came to grappling, being stronger and bigger didn’t actually satisfy anything. The desire to get bigger and stronger only grew. The thought was that if I looked bigger, I would become more confident. For me, the effects of this mindset meant staying at home while force feeding myself in order to gain one more pound than last time I checked. For some people, the effects of this mindset can be even more detrimental.

Taking it a step further

Society has conditioned men to poke fun at body image insecurity issues, but there is no comedy in the harm that BDD causes. BDD can create a wide range of problems. An issue that everyone can relate to is feeling uncomfortable wearing certain clothes. When I feel “small,” I tend to wear larger clothes. To me, a large sweatshirt helps me feel larger than I am, or at least keeps people from seeing how small I am. Wearing a larger sweatshirt is just a small example of what BDD and the mind can do to us. BDD can come with much larger issues such as eating disorders or abuse of certain supplements and pharmaceuticals to achieve that ideal body. The abuse can have long lasting effects and can even last the rest of your life.

Is it a flaw to not be jacked and tan all year long? I don’t think so. That’s just absurd, especially considering that Pittsburgh gets about much sun as a California winter. So take a long look in the mirror this morning and wink at yourself. Focus on that outstanding beard, maybe that bicep vein that is popping out more than usual, or maybe stand a little taller today knowing that you have been putting the time in the gym.

Here’s one more challenge… try to get out of your comfort zone. Either by trying on new clothes that you would normally feel uncomfortable in or eating that last bite that you usually wouldn’t take because you are trying to get super lean for summer. This might sound weird, but my challenge is to try not to panic when I skip a meal or wear a tighter shirt that I feel makes me look small. Since I am always trying to gain weight, I tend to get a little sensitive if I miss a meal. This is partly due to the blood sugar drop, but also the fear of getting “smaller” than I feel I already am. But when I skip a meal now, I breathe. I remind myself that I will not lose every pound of muscle that I have. These are minor steps that will have a large impact on feeling healthier and happier, because in the end, that’s what matters the most: not how you look, but whether you are healthy and happy.