There’s No Age-Limit to Fitness 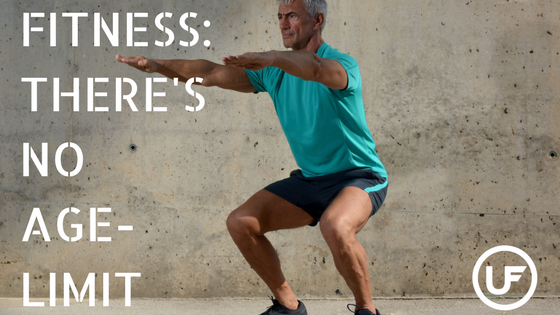 Unless you’ve been living under a rock, you know that exercise is good for you.  One thing you may not be aware of though is this scary sounding thing called “sarcopenia”.  Sarcopenia is actually the fancy, scientific term for how we lose muscle mass as we age.  Ehh, not so big of a deal, right? WRONG! Between the ages of 30-80, men and women can lose anywhere from 30%-50% of their muscle strength.  The loss of muscle mass doesn’t just mean it’ll take you a little bit longer to open the pickle jar either, but some real, scary consequences like heart disease, bone loss, obesity, and cancer to name just a few.  There’s some good news though: it’s never too late to start your fitness journey.

There is no age limit on fitness! Yet we understand that it can be a scary thing to step into a realm you’re unaccustomed to. This holds true for adults and teens and toddlers alike! My five year olds just started kindergarten a couple weeks ago. For weeks leading up to the start, they would have nightmares about people not being nice to them, being unable to make new friends, and simply being unable to find their way to the classroom.  Walking them into their new school on that first day, I held their trembling little hands and wiped away their tears as I said goodbye. Fast forward just a couple hours later to pick up time, those previously frightened little girls had the biggest smiles on their faces and couldn’t stop talking about how much fun they had.  Now they willingly hop out of bed, jumping for joy at the thought of going back to kindergarten each day.

You see, it’s normal to be fearful.  It’s normal to have those feelings that something will go wrong. When you’re starting a new fitness routine, it’s not quite unlike starting kindergarten. Will people be nice to you? How will you know what to do? Will you know all the exercise movements or know how to work the equipment? You ask yourself, “BUT WHAT IF I FART IN YOGA CLASS?!?!” (For the record, it happens and no one cares!)

Luckily for you, once you start your new fitness adventure, whether it be a spin class, yoga class or strength training, you will be jumping for joy to go back too. And although you most likely won’t have your mom there to hold your hand, we do have fitness trainers and coaches available to guide you every step of the way (and yes, we are qualified to wipe away tears too!)

We dare you to be brave! Take that class, lift those weights, let go of those fears! We promise, you won’t be sorry you did.