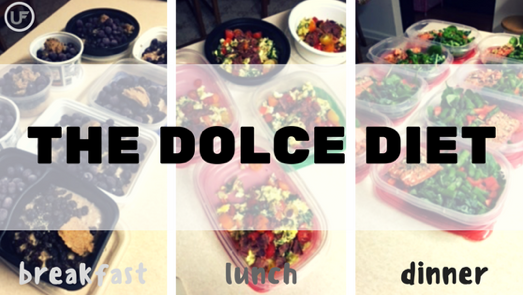 Change is hard.  Adjusting to something new, whether it’s a new schedule, new workout routine or a new nutrition plan, has many unique challenges. Today I’m about halfway through my first week of the Dolce Diet and if I’m being completely honest, it’s haaaard.  To put it simply, I’m riding the struggle bus—I’m tired, irritable and outright haaaaangry! Just ask my coworkers, they’ll tell you. (Sorry Linds & Casey!!)

As a weightlifter, I’m used to eating CARBS.  I’m talking white rice, whole grain breads, tons of veggies, and yeah, the occasional Rice Krispie treat or ten. I’ve also been known to take down a whole pizza in one sitting, like every Friday night to be exact. In the Dolce Diet, aside from the morning oatmeal, there are minimal carbs. Definitely not as many as I’m used to— so cue the Carb Cravings and the Carb Crash.  If you’re unfamiliar with the Carb Cravings (lucky you!), I’ll try to explain it to you.  Imagine your favorite carb, be it pizza or Rice Krispie treats.  Then imagine that every single person you see morphs into that favorite carb.  Literally just slices of pizza walking around everywhere! You can smell the gooey dough. You can almost taste that salty first bite of cheese. Everything is so real and your brain is telling you to “EAT PIZZA NOW.” That drool inducing phenomenon is what I call the dreaded Carb Cravings. The Carb Crash on the other hand is when you’re knocked back into reality and realize, “Nooooo, they are just people. You can’t eat them. That’d be weird and most definitely highly frowned upon.” The crash is harsh.

So how do I deal? Deep breaths. Inhale. Exhale. Repeat.  Savor the food I do eat. Focus on the good, nourishing aspects of my food. Focus on the change. Focus on the end goal but enjoy the process. Focus on my health.

I’ve also realized that I need to heed my own advice.  I often tell my clients to find a balance between the edge of old habits and the challenges of the new, slowly making progress step by step.  I tell them to learn to be comfortably uncomfortable because that’s where we see the greatest changes. I’ve never told anyone it was easy though. Change is hard but I’m not giving up.