Meal of the Week

I come from a long line of excellent chefs. As a child, my grandparents owned a Chinese restaurant in Mt. Lebanon and lived above it. My siblings, parents and I were literally always there. My grandfather was the head chef, having avoided the front lines of WWII because his commanders found out about his extraordinary cooking skills. My grandmother, bedridden, was the designated babysitter of my brother, two sisters and my wild youngest sibling self. My great Uncle was the prep chef and we would often escape to the basement to help him peel shrimp and roll wontons. My mother waited tables in between managing her own business called “Diane’s Delightful Desserts” (now you know where I get my love of alliteration from). My father manned the massive woks in the kitchen where we would sneak in for tastes of whatever was cooking. Suffice it to say I had a great childhood (and yes, I can still roll a mean wonton). But I think my grandparents would roll over in their graves to see my slacking cooking skills as of late. Every week when I’m meal prepping or thinking about what I’m going to cook for the week I ask myself one question: What is going to be the easiest?

Since the baby was born, I rely almost exclusively on my crockpot. My go-to breakfast is some version of steel cut oats. This week’s delicacy: 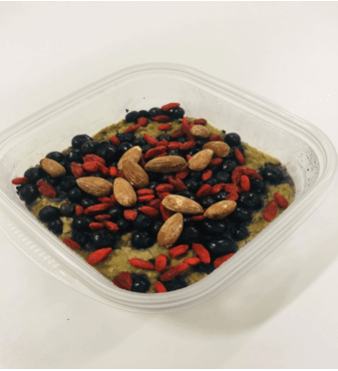 My lunches usually consist of some sort of protein that I can cook in the crockpot. Typically I throw a huge beef roast in but I’m attempting to scale back on my red meat intake so this week I did chicken. Ever since my pregnancy though, I cannot stand the taste, smell or texture of chicken. So I attempted to disguise it by making Shredded Buffalo Chicken & Asparagus:

Maybe one day I’ll make my family proud again by honing in on my hereditary cooking skills but for now it’s crockpot, crockpot and more crockpot. If you’re struggling with healthy meals, try dusting off your crockpot and get creative. Share your recipes with me because I think my kids might spit at me if I feed them oatmeal one more time.